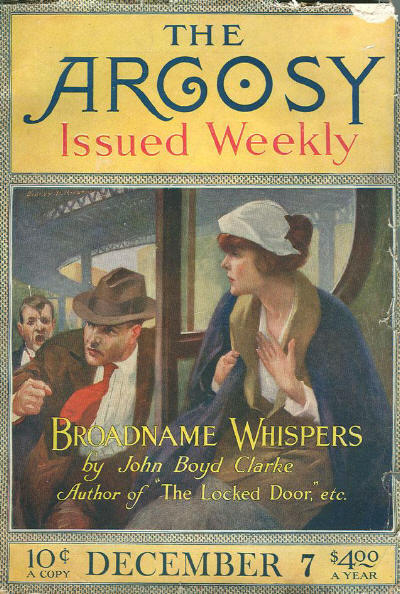 Dan Barry is a Superhuman cowboy adventurer. Barry is the “Pan of the Desert,” an orphan of mysterious origin who is adopted by Joe Cumberland, a rancher in the “mountain-desert” of the American Southwest. Barry grows up to become a rather strange man, short, slim, and almost feminine, with an uncanny (literally) rapport with animals; he is always accompanied by a wolf named Black Bart and by a horse named Satan. When Cumberland first sees Barry the boy is following a flight of geese and apparently whistling to them. This gives rise to Barry’s nickname: “Whistlin’ Dan.”

As an adult Barry is nonchalant and almost imperturbable, until Jim Silent, the leader of a gang of outlaws, hits him. Then a yellow light glows in Barry’s eyes, and he becomes bloodthirsty. Barry ends up killing Silent--not in a traditional Western shootout, but by strangling him. Barry is in love with Kate Cumberland, his adoptive father’s daughter, but the call of the wild is too much for Barry, and he ends up wandering off.

In the two later novels Barry settles down with Kate Cumberland. The call of the wild still pulls at Barry, and he often wanders the night with Black Bart and Satan. In these novels Barry is referred to as a “werewolf” and a “wolf.” Dan and Kate eventually have a daughter, Joan, but a group of seven men shoot Dan’s horse (not Satan), and he kills six of them before finally being shot to death by Joan.