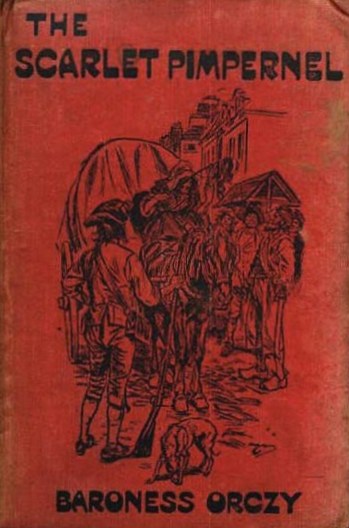 The Scarlet Pimpernel is Sir Percy Blakeney, one of the richest men in England during the years of the French Revolution. Blakeney is a silly, brainless fop, a “nincompoop,” an utter tit. He's languid, logorrheic, and a ninny. At least, that's his cover. In the disguise of the Scarlet Pimpernel, Blakeney is a brave, dashing hero who specializes in rescuing the imperiled French aristocrats from their sentences of death-by-guillotine, often from Paris and under the noses and eyes of the French guards.

The Pimpernel is a master of disguise, a top-notch swordsman, and a cunning strategist. Repeatedly he foils the plans of the French and their “Satanic” agent Chauvelin. Blakeney is assisted by the League of the Pimpernel, a band of devoted English noblemen who implicitly follow the Pimpernel's orders. Blakeney is married to Marguerite, who is "one of the most clever women in Europe” and a devoted, loving and courageous wife, though devoted and loving only when she discovers that he is not a coward, but is the Pimpernel.