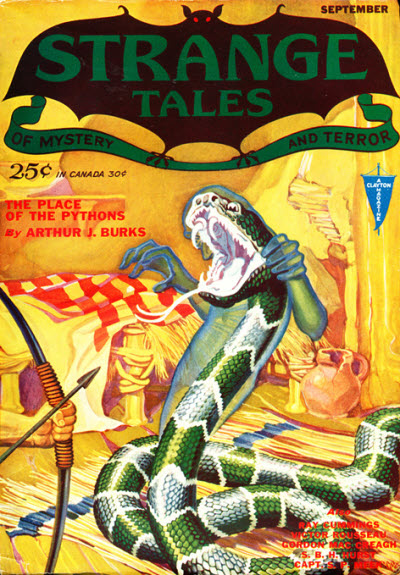 Doctor Muncing is an Occult Detective. He uses pseudo-scientific terminology to explain the psychic monsters he faced, so that the Dr. Muncing stories are full of terms like "geoplasm" and "visophaging" and discussions of vibrations and elementals from higher dimensions. Dr. Muncing lives in a sober, respectable office in a middle-class part of New York City and is assisted by Dr. James Terry, a large young man, of the sort of "devoted more of his college years to study of football than of medicine" but one who is intelligent, capable, and a help to Dr. Muncing when needs be. Muncing himself is "of little more than middle height, broad, with strong, capable-looking hands," a "square cut" face, "deep set, brooding eyes, suggestive of a knowledge of things that other sober citizens did not know," generally tanned ("from much travel in far-away lands") skin, and has a "thin, wide mouth that closed with an extraordinary determination." Muncing is very confident (without at all being obnoxious or conceited) and quite good at putting his worried patients at ease. He has a well-earned distaste for amateur psychics who ignorantly tamper with "what forces exist on the other side of that thin dividing line that we don't begin to understand" and thereby unleash or free those forces.

In the world of Dr. Muncing humanity is surrounded by disembodied vibratory consciousnesses, of greater and lesser intelligence, which appear to humans as ghosts or, occasionally, more physical, malign, poltergeist-like...things. But they don't like cold iron (and "pentagons, Druid circles, etc, and even the holy water of the Church"), and Dr. Muncing is capable of driving them off, though more from depriving them of their human energy sources (they draw on humans for their vitality) than through any feat of psychic or physical exertion. He does make use of his impulses and instincts to track down the various spectral bogey-men, and in at least one story he uses a "queer, five-sided emblem of iron" to exorcize a very nasty ghost.