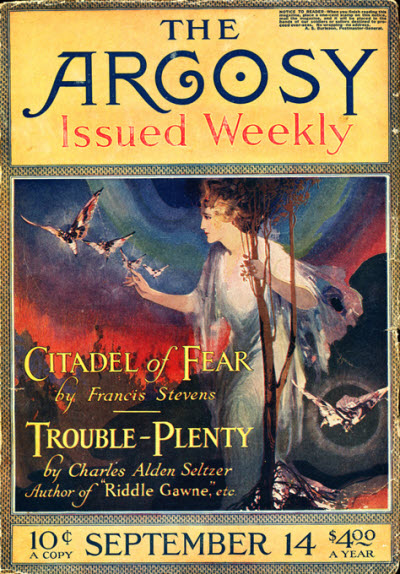 Kennedy. Kennedy was created by “Francis Stevens,” the pseudonym of Gertrude Bennett, and appeared in “The Citadel of Fear” (Argosy, Sept. 14-Oct. 28, 1918).

Two men are searching for gold in the barren hills of Mexico: Boots, a muscular, tall Irish-American, and his partner, Kennedy, who is ruthless, vicious, well-educated and intelligent. They are dying of thirst in a remote area when they are rescued by Svend Biornson, a former archaeologist and the owner of a plantation. Boots and Kennedy are mystified by aspects of the plantation and by Biornson himself until at last they discover that the plantation is actually an outpost of a Lost Race of white Aztecs, half of which worship Quetzelcoatl (they are the good guys) and half of which worship Nacoc-Yaotl (Tezcatlipoca in another form—these are the bad guys). Kennedy and Boots enter Tlapallan, the land of the white Aztecs, but are captured when they try to escape from it. Kennedy witnesses one of the forbidden rites of the priests of Nacoc-Yaotl and goes insane. The Tlapallan judge Boots and Kennedy: Boots is allowed to leave, but Kennedy, who is now deemed to be the property of Nacoc-Yaotl, must stay.

Fifteen years later a man named Colin is visiting his sister Cliona when a monster breaks into Cliona’s house. She shoots it, but it escapes. Colin lies in wait for it, and when it returns, he attacks it. It is a giant white ape, but somehow Colin breaks both its arms, and it runs away. Colin tracks it to a remote home, owned by one Dr. Reed, and discovers that the ape, Genghis Khan, is owned by Reed. Reed captures Colin and reveals that he, Reed, is actually Kennedy, who is now living with Biornson’s daughter. Kennedy escaped from Tlapallan following the civil war between the worshipers of Quetzelcoatl and those of Nacoc-Yaotl. He took a wealth of gems with him, as well as some of the scientific secrets of the white Aztecs, and used them to become a Mad Scientist, creating monstrous new forms of life, like the white ape Genghis Khan. Kennedy believes Boots abandoned him and plans to transform Boots. But Biornson tracks Kennedy down. Quetzelcoatl appears and demands that Nacoc-Yaotl, who is possessing Kennedy, stop his wrongdoing. Kennedy is killed in a shootout. Boots marries Biornson’s daughter. Good triumphs over evil.