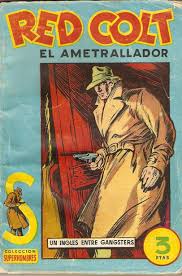 Red Colt is a Costumed Avenger Killer Vigilante. He is a young English lawyer who makes the mistake of traveling to the United States with his new bride Nelly. While Colt and Nelly are walking down the street of an unnamed city, two warring groups of gangsters open fire on each other, and Nelly is killed in the ensuing battle. Colt, who is unable to discover who was responsible for killing Nelly, instead declares war on all American gangsters. He challenges them individually and en masse and kills them with his machine-gun. Colt is assisted by another costumed hero, Capitan Pantera, and by Lefty Longled, who assisted Audax, a Debrigode Dugi hero from another (post-1945) dime novel series.